OPCF Urges Public to Refrain from Actively Interacting with 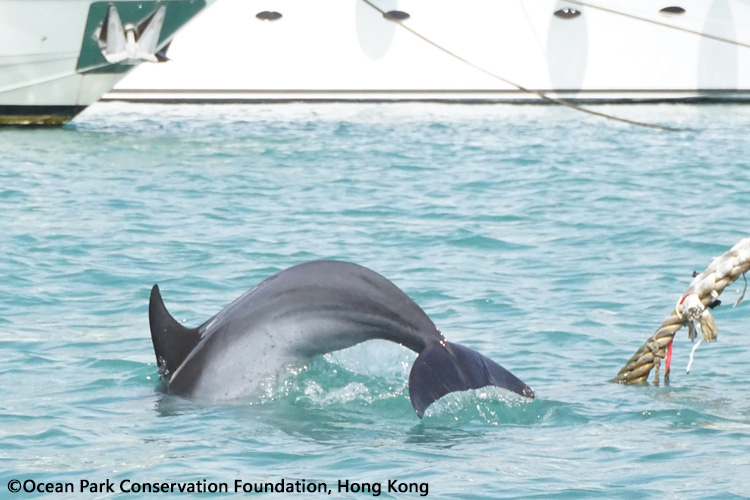 (Hong Kong – 12 May 2020) A subadult pantropical spotted dolphin has been repeatedly sighted in the southern district waters of Hong Kong since 15 May 2019. As its body condition was good with a low risk of stranding, the Marine Life Stranding Response Team (Response Team) of Ocean Park Conservation Foundation, Hong Kong (OPCFHK), and the Agriculture, Fisheries and Conservation Department (AFCD) decided to closely monitor the dolphin without interference. It comes to OPCFHK’s attention that recently there has been an increasing number of videos and photos on social media, especially during weekends and public holidays, that show swimmers swimming and playing with the dolphin in the water. In view of this, OPCFHK would like to make an appeal to the public for keeping a distance from the dolphin and refraining from disturbing it.

The pantropical spotted dolphin[1] (also known as “Dave” on different social media channels) which appears near Deep Water Bay and Middle Island areas was actually first sighted near Sai Kung back in December 2016. He was seen with two other pantropical spotted dolphins in healthy condition at that time. Apart from regular monitoring by the Response Team and AFCD, a few sightings were also reported by fishermen and other members of the public. The dolphin was alert and suspicious when the Response Team examined its condition underwater. However, the dolphin seems to get more and more used to human contact when spotted again in southern district waters since 15 May 2019.

Michael Boos, Director of Ocean Park Conservation Foundation, Hong Kong, said, “It is very important to maintain distance with wild animals for your own safety and the animal’s safety, as behaviours of wild animals could be unpredictable. It is better to leave the animal alone even if it appears to be comfortable interacting with humans. The more the dolphin is around human beings, the easier it may lose its survival skills and the will to find its own species,” Boos continued. “Hong Kong is home to an impressive array of wildlife, and we all have the responsibility to respect each other.”

OPCFHK therefore urges the public not to feed, approach or touch the dolphin, and to be mindful of the surroundings when operating motorised watercraft and vehicles to avoid injuring the dolphin. Last but not least, OPCFHK invites the public to call the 1823 hotline if they encounter any stranding cetacean, providing the time and place with photos (if any) so that the Stranding Response Team could take immediate actions where appropriate.

[1] The pantropical spotted dolphin can be found in temperate and tropical oceans, such as Taiwan and the Philippines. There has been a history of occasional sightings in Hong Kong waters since 1996. For more information, please visit https://www.opcf.org.hk/en/conservation-research/local-conservation-efforts/local-cetacean-stranding-investigation.