Nicknamed as the "sea-pig", the finless porpoise looks round and chubby. They are grey in color and beak-less. The most distinct feature of the finless porpoise is that it lacks a dorsal fin. Instead, they have a wide (about 48 to 120mm wide) dorsal groove that begins just ahead of mid-back and extends to the tailstock.

Newborn calves are typically 65 to 85 cm in length, and can grow to as much as 200cm (average: 150-170cm) in length. Finless porpoises are usually found singly or in groups of up to about 10 individuals. The most common and numerically important prey species is the cephalopod, followed by the lion-head fish and the tiger-tooth croaker.

Finless porpoises can be found in the southern and eastern waters of Hong Kong. We can sometimes find them in areas between the southern side of Lantau Island and Lamma Island. It is estimated that there are about 200 finless porpoises in the Pearl River Estuary (including Hong Kong). However, this could probably be an underestimate as finless porpoises have no dorsal fin and are relatively shy. Also, they seldom approach boats or exhibit aerial behavior. Hence, they are very difficult to spot compared to Chinese White Dolphins.

The conservation status of finless porpoises and Chinese white dolphins is a great indicator to assess the general health of Hong Kong's marine ecology, as both species reside in Hong Kong waters, in the heart of Hong Kong's intensive urban development. Their population, distributions, behaviours and survivorship provide valuable insights into the impacts of human activities on marine life, and the threats brought about by marine pollution and fishery equipment. Like other harbour porpoises and dolphins, finless porpoises are the apex predators in the food chain. They play a critical role in maintaining the balance of the marine ecology by controlling the number of other marine lives such as fishes and squids. 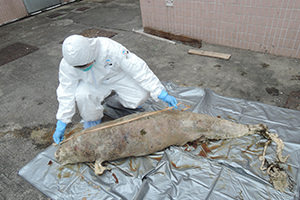 Objectives
Samples collected from the stranded cetaceans provide us with important information about local cetacean, including age, sex, causes of death and accumulated organic pollutants, which enabled conservationists to better conserve the animals and their habitats.

The Foundation has been funding finless porpoise research and conservation projects in Asia, such as studying the species’ population structure in the Pearl River Estuary, Japan and Malaysia. 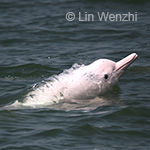 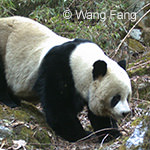 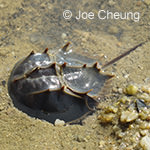 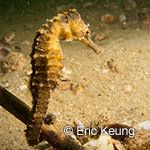