In the past, provision of food by humans resulted in the rapid increase in numbers of the local macaque populations in Kam Shan, Lion Rock and Shing Mun Country Parks. In 1999, feeding wild macaques has been prohibited by the Agriculture, Fisheries and Conservation Department (AFCD) to encourage wild macaques to revert to the countryside for natural food. However, some macaques remain habituated to both people and human food. Human-macaque interactions occasionally result in conflict and macaque behaviour is interpreted as aggressive as seen when macaques snatch bags from people in search of food.

Since 2009, OPCFHK has been contracted by AFCD to help manage the local population of wild macaques with the implementation of a contraceptive programme. Female macaques are sterilised via endoscopic tubectomy, a contraceptive operation that leaves the ovaries in place but interrupts the fallopian tubes, thus not allowing the egg to meet the spermatozoa. In 2014 we started performing endoscopic vasectomies on males. The contraceptive programme successfully reduced the birth rate by more than half, from over 60% in 2009 to below 30% in recent years. This programme aims to sterilise 80% of the female macaque population that currently resides in these country parks. This contraceptive programme is one of the mitigation efforts in dealing with the rising issue of human macaque conflicts. 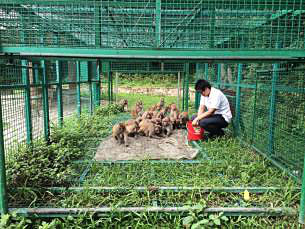 The contraceptive programme involves trapping troops of macaques once every two weeks, with a lower frequency during the hot summer months. The macaques are first habituated to enter a cage by OPCFHK’s Survey Officers. Once a troop is trapped, the macaques are anesthetised and given a thorough physical examination. They are also dewormed and vaccinated against rabies.

Adult and sub-adult macaques are selected for endoscopic tubectomy or vasectomy. This procedure, while rendering the animals infertile, retains the gonads (ovaries and testicles) intact and with it, the normal sexual behaviour. With experience and practice gained over the past years, the surgical procedure now only takes four to seven minutes to complete. 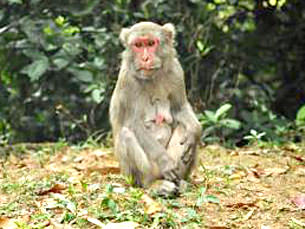 After the surgical procedure, the macaques are given a tattoo on their chest to indicate they have undergone the procedure. Each macaque troop has its own tattoo pattern for easy identification. When all the macaques have recovered from the anaesthesia, they are released on site the same day. 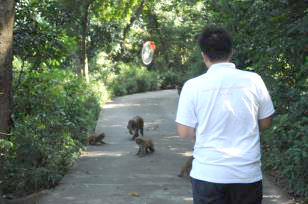 Two OPCFHK Survey Officers survey the Kam Shan, Lion Rock and Shing Mun Country Parks daily to collect much needed information on the present status of the wild macaques, including their habitat use and range, demography and birth rate of individual troops. The data collected is vital for assessing the success of the contraceptive programme as well as for future planning in managing this population.

The total population of wild macaques in Hong Kong is estimated at 2,000 individuals. On-going survey efforts have identified over 22 macaque troops with an estimated population of 1,600 individuals within the Kam Shan, Lion Rock and Shing Mun Country Parks; and the largest troop within this area has more than 250 individual macaques.

You have an important role to play in helping manage the local macaque populations. Do not feed the wild macaques! When they no longer associate people with food, they would remain in countryside in search of natural food, reducing negative human macaque interactions. Let's strive for peaceful co-existence.