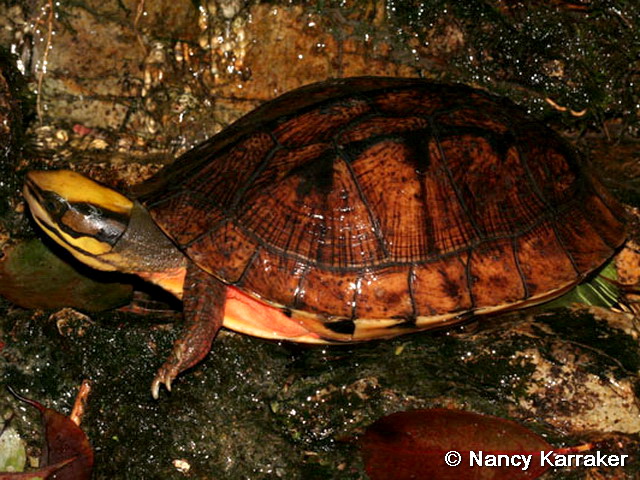 (16 August 2018 – Hong Kong) The Ocean Park Conservation Foundation Hong Kong (OPCFHK) today announced funding for 19 projects for 2018-2019 with a total contribution of HK$8.39 million. Since 2007, OPCFHK has supported a variety of conservation projects on wildlife threatened by illegal trade in Asia, and it is stepping up its ongoing efforts in the area with three newly funded local projects, including a programme to protect the critically endangered Golden Coin Turtle (Cuora trifasciata).

The Golden Coin Turtle programme, funded for 2018-2020, involves conservation genomics and its application to ex-situ breeding and wildlife DNA forensics. Hong Kong is one of the last, if not the only place where wild Golden Coin Turtles can still be found. Given the species’ high value in the illegal pet trade and for use in traditional Chinese medicine, it has been driven to the brink of extinction. It is now listed as the world’s ninth most endangered tortoise and freshwater turtle species by the Turtle Conservation Coalition, and is listed on the IUCN Red List as Critically Endangered.

The 24-month Golden Coin Turtles project applies genomic techniques to manage conservation, captive breeding, and reintroduction efforts, especially in Hong Kong. Genetic techniques will be used to clarify genetic relationships and origins of Golden Coin Turtles across Asia, develop a system to ensure proper reintroduction of captive-bred individuals to the wild, and eventually help with law enforcement and wildlife conservation in the long run.

Other OPCFHK conservation initiatives to combat the illegal wildlife trade include funding the development of a forensic toolkit to aid in the conservation and prevention of the illegal trade of critically endangered Helmeted Hornbills, as well as a regional expert workshop on Asian Groupers, which is a group of fish that is commonly exploited in the illegal, unreported and unregulated reef fish trade. Asia’s leading experts on groupers will undertake a regional IUCN Red List assessment, and develop actions and long term plans to improve the monitoring and management of Asian groupers.

OPCFHK’s efforts also extend beyond Hong Kong, contributing over HK$80 million to fund 479 projects concerning 195 species in 18 Asian countries and regions since 2007, including the rehabilitation, reintroduction and conservation planning for confiscated Javan Slow Lorises. That project successfully raised the survival rates of reintroduced Slow Lorises by 50% through the implementation of an adaptive rehabilitation protocol. The arrests of traders also increased with new support provided for law enforcement bodies and government officials.

Hong Kong is at the hotspot of illegal wildlife trafficking. In 2016 alone, the Customs and Excise Department detected 309 cases of endangered species of animals and plants[1], while in 2015, it seized over 1,074.8 tonnes of illegally imported and exported species listed by CITES, which is 251 times the quantity seized in 2011[2]. Despite local and international laws and treaties enacted to discourage such trade, many species are in imminent danger of extinction and proactive steps must be taken. OPCFHK’s role, as a conservation advocate in the Asia region, includes initiating and funding projects to curb illegal wildlife trade in endangered species, across both Hong Kong and the region.

OPCFHK is also pleased to announce the re-appointment of Ms. Judy Chen as the Chair of the Trustee with effect from 1 July 2018. “I am honoured to be re-appointed as the Chair of OPCFHK. It has been 14 years since I was first appointed as the Trustee Chair in 2004, but I always feel that I can do more,” said Judy Chen, OPCFHK’s Foundation Chair. “Hong Kong is a wildlife trafficking hub contributing to the global problem of illegal wildlife trade that is irreversibly jeopardising Asia’s biodiversity, we must take immediate action before it’s too late to turn the tide and build a deep understanding of the species and threats to them. Regional cooperation is critical. That is why OPCFHK continues to support conservation of Asian wildlife through partnerships, fundraising, research and education.”

The public can also make a difference and play a role in combating the illegal trade of threatened wildlife by avoiding products made from threatened species, always asking for the facts of any wildlife or plant products before purchasing, or seeking out sustainable alternatives. Please support the Foundation’s research and conversation projects and join hands to stop these ecological disasters by making a donation to OPCFHK. (Link to details: https://www.opcf.org.hk/en/friends-of-the-foundation)